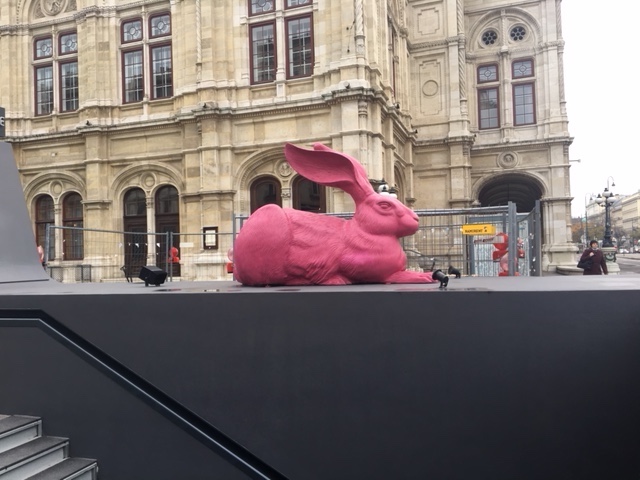 Kieran O’Leary of Irish Film Archive did a perfect job summarizing the conference here, so I really recommend reading that one and only reading mine if you want a sub-par sequel. Or don’t even listen to either of us, just go watch the talks! Here you can find the schedule. 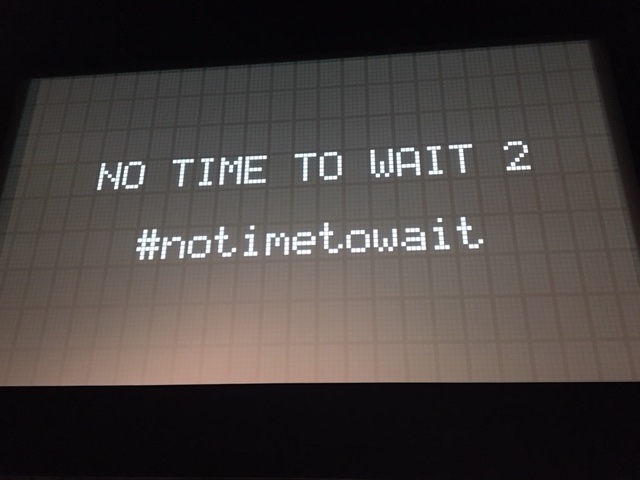 Some of the major themes this year:

I was really into Dave’s super accessible explanation of the significance of the granular fixity available in FFV1/MKV – comparing it to how if you pull a fire alarm, it notifies the fire department of your exact address and they know exactly where the fire is. But, with file fixity only at the file level, it is like pulling a fire alarm to let the fire department that there is a fire “somewhere in Vienna.” Along with this, I was excited Ethan Gates was able to attend the conference and speak on the work he is doing “indoctrinating” emerging a/v archivists with open source (although I worry a few people didn’t realize he was using that word as a joke!). 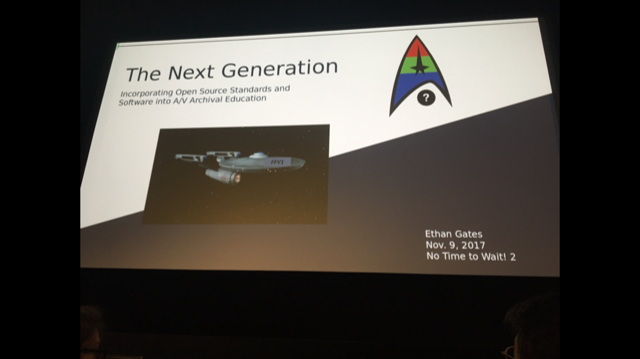 I got so much out of Martin Below’s talk and look forward to going back to it. In summary, he was explaining the ways in which he uses the Menu/Chapters aspects of Matroska files and did some in-depth demonstrations using a digitized Star Trek boxed set. He uses it to refine down to skipping the intros, showing a list of his favorite episodes, or cutting out the credits, and how that affected the overall time. I’ve been working with the Matroska specification for three years and although I knew of these features, I hadn’t been able to appreciate them and see them in use like this. It’ll help me work with him to refine the specification further.

Agathe Jarczyk’s talk, “Dreaming of an Ideal Software Player for Video”, was a favorite among many, myself included. She did an excellent job at laying out the concerns shared by time-based media conservators when diagnosing work. I’m always a bit jealous of conservators that get to spend lots of time on a small amount of strange objects, rather than the shovel-it-all-through/automate-automate-automate mentality I hold as a combo archivist/developer. I was also happy to hear from Ana Ribeiro from Tate during the Format Implementation Panel and would have liked to hear a whole talk about the formatting and normalisation issues at Tate as they have such a focus on presentation, but was glad to get to talk with her afterwards. 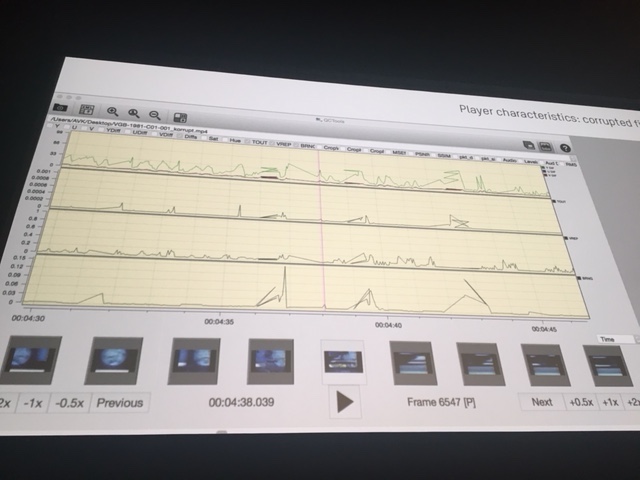 Wow, have never seen a chart like this! – From Agathe’s slides

Reto Kromer also spoke of his wishes in a gentle way for the Matroska and FFV1 standards, and was pleased at Steve Lhomme’s presentation updating us on the Matroska specification efforts, because it sounds like he will be getting many of his wishes. It was also fortunate that Steve works on VLC and could let Agathe know that the upcoming release (available now in beta) of VLC should be able to fulfill some of her wishes too.

These kind of productive conversations between the preservation-practicing tool-users and tool-makers is what makes this conference such a delight, and was largely the motivation for having it exist. It was unfortunate to hear from a presenter dead-set on making sure we knew she didn’t give a fuck about uncompressed files, and who did not seem to understand that her research is dependent on preservationists getting it right for her benefit, particular when it comes to digitized film assets that require framerate and playback speed expertise up-front. Maybe this means we need to do a better job at educating the general public as to why our professional is valuable, or maybe this person was just both very rude and very uneducated?

Speaking of film, the final batch of talks, being film-related, made me surprisingly nostalgic for when I used to work with film materials. I enjoyed the depth of technical knowledge across a wide spectrum of film-based issues and the final panel, which was able to successfully hit the tired “film vs. digital” debate with new perspectives.

I felt I didn’t have much to contribute during the panel on open source and dealing with philosophical challenges within institutions, but thoroughly appreciated Alessandra Luciano’s direction, input, and her perspective that cultural heritage institutions have a moral imperative to choose open source. I also thoroughly appreciated Steven Villereal’s emphasis on acknowledging the need for an understanding of who holds the power within institutions more largely, and his note on how archival institutions often share very little values of SMPTE members, so why do we end up relying on SMPTE-approved standards? Is IETF not trusted enough by old-school broadcasters as a valid standardizing body? (If they don’t, too bad, cuz IETF is the best!). In general, I hope more institutions allow for closer collaboration between their IT teams and archiving teams, and I hope more skill-sharing can happen between these teams, because it is essential to successful preservation of materials.

Amazing to see the conference grow from a group of ~50 to a group of nearly 100 this year, and to see it mature in many ways. I missed the breakout sessions we had last year but I know it would have been difficult given the space and size, and I think a lot of the panels made up for it. I find that breakout sessions help increase the likelihood of more timid audience members to share their experiences, though. Despite this, though, there were always many questions and comments after the talk, and this was the first time I’ve been at a conference where I’ve heard “This is more of a comment than a question…” (and this happened frequently) but then the comments would be actually very valuable, thoughtful, and considerate. As always, I look to Code4lib’s conference model, which has been able to scale itself and maintain a close-knitted community feeling. As Kieran mentioned, it was great to have a core ffmpeg developer come and very actively participate, and he seemed to leave thinking fondly of his two days spent with us and of archivists in general. I like to think that we converted Steve Lhomme over to Team Archives last year, and this year we were able to convert Carl Eugen Hoyos.

Very excited to re-watch many of the talks and review the slides – there was so much information crammed into these two days that I just wasn’t able to take it all in! I also have to go back and watch Jimi’s talk and Kieran’s talk, because they both immediately preceded times when I spoke so my mind went completely blank due to presentation-nervousness. I owe it to them to re-watch in a more calm state!

Finally – Thanks so much to the conference organizers, volunteers, and sponsoring organizations! 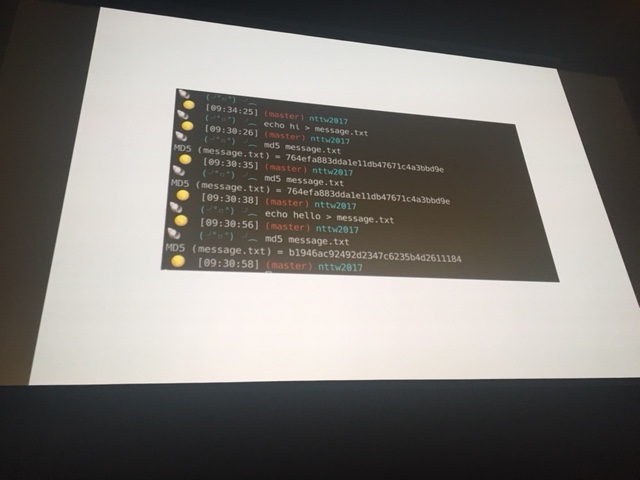 Funny to see my Terminal style while someone else presents!