The below writing was included in Screen Slate’s “The Year the Internet Broke”, a publication corresponding with a film series held at Anthology Film Archives earlier this year, right before the big shutdown of 2020 and the last time I used the subway, walked in Manhattan, saw people casually, hugged a person I don’t live with, and ate at a restaurant. Copies still available through the link above, and it goes towards supporting this excellent and dedicated group covering NYC alternative cinema (and during the pandemic, global distributions). 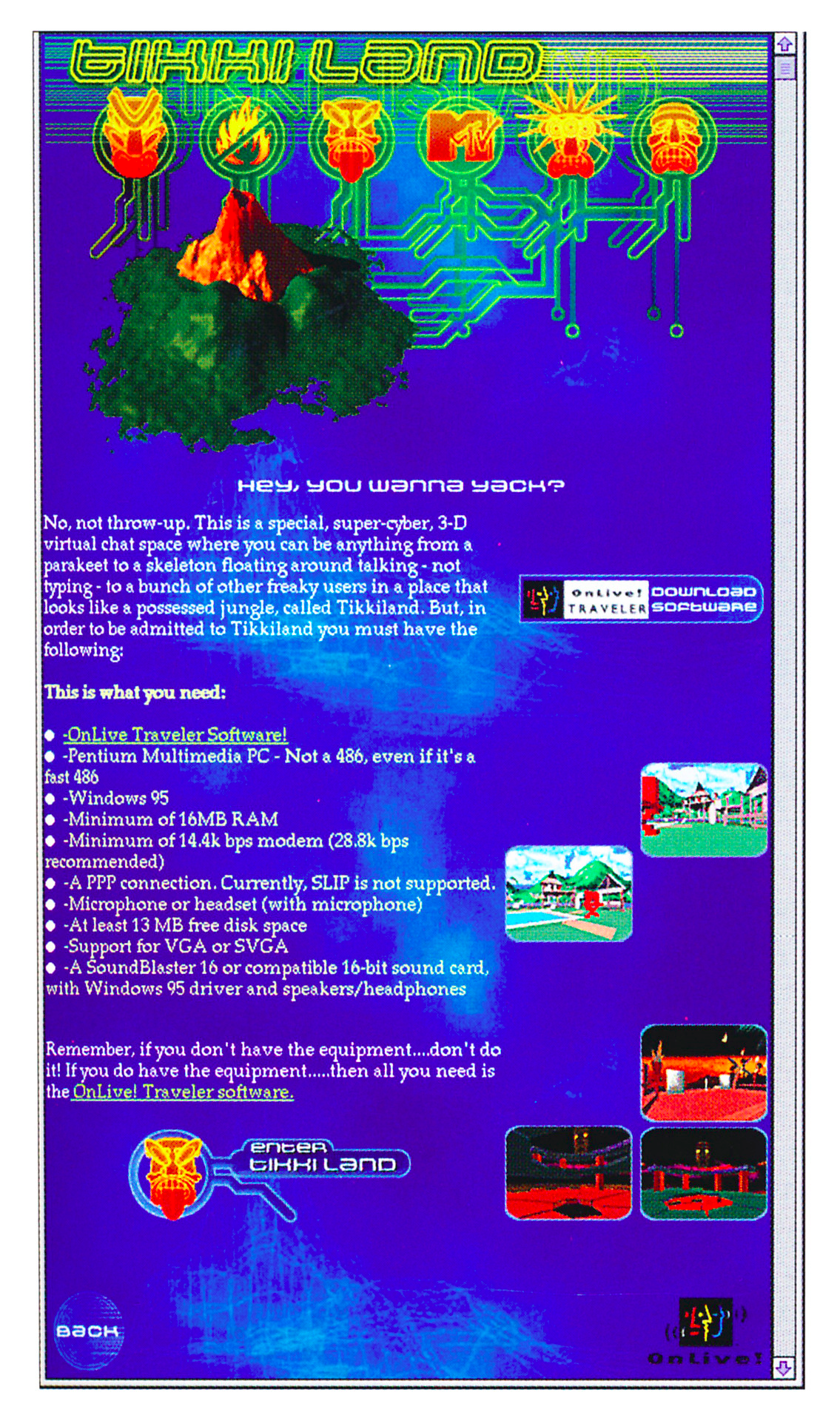 It’s 1995, America is suddenly very online, and corporate executives are desperate to “connect” to an expanded video audience. MTV is in the throes of an “Alternative is mainstream” era where everything coming out of the pacific northwest is in, but is increasingly fading back into a “harsh realm” (please internet-search: Sub Pop pranking the New York Times into posting faux grunge speak). Radiohead has just come up for air at a reasonable pace, recovering from the “Nirvana-lite” criticisms of Pablo Honey (1993), but yet to shift into their electro-xanax breakthrough album OK Computer (1997). During this time, MTV’s web presence was branded as “MTV Online”. This would later evolve into the now-mundane MTV.com as soon as the technical vernacular of the internet had spread lightspeed across North America and even through Viacom C-Suite meeting rooms. Like other mega-corps of the ’90s, Viacom was fumbling to get online as fast as possible and throwing as much money at the problem as necessary, including suing their own employee for the coveted mtv.com domain rights and hiring swanky interactive design teams to create a web presence worth spilling ink over, in an endless attempt to seem extremely young and cool online – a pinnacle they are still struggling to reach and absolutely never will. In the 90s, the cyber-superhighway was full-steam ahead, and the dot-com bubble was exponentially growing with not even the slightest indication that it would bust any time soon.

Despite having a web-launch kick off in the middle of Northern Hemisphere summer, MTV decided to take an aggressively acid trip Spring Break approach to their entire web design aesthetic. I can only speculate that this is an homage to the overall media approach to “logging on” in the mid-90s, in which you don’t merely boot up a computer, connect it to a phone line, and wait a while – you. are. SURFING. – and pairing that with the last bastion of the post-grunge free-fall of a 60s-throwback Fruitopia advertisement. Viacom had already hired creative director Manabu Inada as their founding Art Director for their MTV Interactive branch to create a dizzying hypercolor-drenched website. Something I also think is worth noting is that Inada’s resume (look it up) mentions managing a staff of merely 4-8 people to create and manage their entire internet presence and strategy (far less than modern web ventures, but still more than Screen Slate).

In an effort to create a cutting-edge connection between their cable programming and this new communication superhighway, MTV partnered with OnLive! Technologies, a company that claimed in 1997 to be the leader in IP-based group conferencing technology (look it up) and very likely was. In fact, OnLive! Technologies had just received a $23 million boost in investment from WeWork’s (hopefully) last resuscitation team, SOFTBANK, and other investors including Intel and Microsoft.

“MTV: Music Television, a unit of Viacom Inc., and OnLive! Technologies announced today that MTV fans now have access to online technology that, for the first time, enables groups of people to talk in 3D virtual environments over the Internet. MTV is unveiling this technology both on-air and online July 11.”

MTV was leaping into cyberspace with the same enthusiasm as Sandra Bullock reaching for her mouse to order a large regular crust, anchovies, garlic, and extra cheese with a virtual world dubbed Tikkiland, following the popularity of MTV’s Spring Break programming and its cartoonish, grunt-intoning bro-mascot, the Tikki God. And no lie, this was some seriously innovative work, considering the largest tech companies in the world in 2020 still can barely cobble together a seamless audiovisual communication platform. The OnLive! Technologies software was not just your standard text-based chat, but “end-user client software that allows real-time voice communication in 3D Virtual Environments.” As a reminder for where web browsers were at technically in 1996, JavaScript support was added in the summer, CSS was mostly still an idea, the <blink> and <marquee> tags were on their deathbeds, and the inclusion of tables and frames were permissible only one year prior.

One of the creators describes the experience in his online portfolio (look it up):

“OnLive! Traveler teamed up with MTV Online for it’s first big commercial rollout. I went down to the MTV Beach House in Malibu – spent the day and meet [sic] the VJs, writers, and producers to plan MTV Onlive. I also photographed the Beach House so we could make our virtual beach house called Tikkiland. We had less than a month to bring the whole thing up. We made three new spaces ( with specifc [sic] activities for each) and a new avatar - the Tikki God.”

Less than a month to bring the whole thing up!

For major media companies in the 90s, you weren’t just responsible for putting together a website, but for maintaining an entire internet presence, including event management and digital crowd control, all of which is now a massive industry for millions of people. DiPaola continues:

“MTV gave us free press and media but we created, produced, and managed all events and activities. We had 1000s of people per day downloading Traveler and enter TikkiLand for the first time. It was such a success that MTV TV decided to create an entire day where all the VJs broadcast as avatars in tikkiland – so MTV went virtual for the day, broadcasting “live” from OnLive Tikkiland.”

The virtual world software that MTV commissioned and developed by OnLive! Technologies was known as Utopia: “a browser that combines virtual reality modeling language to create the illusion of moving in a 3-D space, and the ability to talk to other computer users via a computer microphone.” (look it up) In this virtual world, the TikkiLand experience consisted of with a handful of DOOM-style rooms with styles based on this Spring Break Daytona concept with rudimentary 3D floating heads as avatars. In addition to the Tikki God, users could be a tiger, a parakeet, a pirate, a floating eye inside of a mouth, or a dozen-or-so other custom-themed options – with an uncanny valley aura that sits right in between Fred Parke’s computer-generated facial expression software dissertation from 1974 (as later featured in Miley Cyrus’s We Won’t Stop music video) and the grotesque Memoji that Apple introduced to unprepared audiences in iOS 12 in 2018. 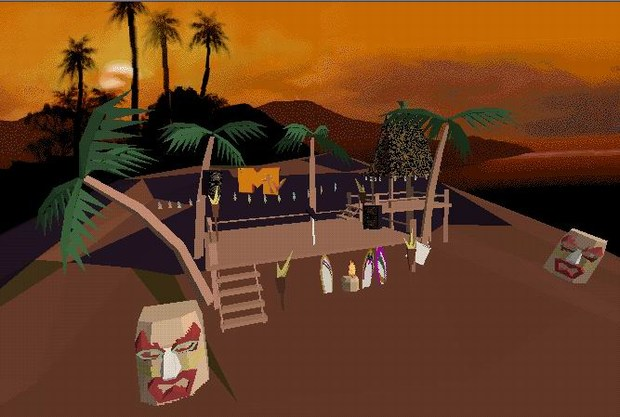 Users were promised events with their favorite VJs and bands hanging out online, and VJs were recorded introducing music videos in the OnLive! environment as a way to encourage their television audience to join them. When that wasn’t happening, users were free to browse rooms, modify their disembodied heads or change their voice to be pitched up or down, and meet new internet friends.

Technology-wise, the messaging around Tikkiland is mixed – there’s an emphasis on how easy it is just log on and chat with people by speaking, just as you would in your very own Spring Break party house. But there are some heavy language around how supremely advanced your computer would need to be – and now solicit the same laughter as a contemporary Hackers audience watching teenage hackers gasp over Acid Burn’s at-the-time advanced laptop specs (“RISC Architecture is gonna change everything!) If you want to surf on up to Tikkiland, you’re looking at a Pentium Multimedia PC, (with the additional chiding of “Not a 486, even if its a fast 486”), Windows 95, at least 14.4 bps modem. 13MB free space, VGA or SVGA, and a SoundBlaster 16 sound card (or equivalent). Users are warned to not even attempt to join in with the other freaky folks in the “possessed jungle” if they don’t have at least those specs. With the right hardware, users could anticipate a live audio chat experience with a maximum of 20 users per room while they float around a 3D world at approximately 1-5 frames per second.

In terms of popular culture’s reception, other media reporters would summarize Tikkiland as “buggy but fun” (look it up) and “sporadic but impressive” (PC Novice, Vol. 7 Issue 10). One virtual traveler describes the experience on their Angelfire page as “really funny when the sound of the voice fit to the avatar . it just looks so real.” (look it up). It’s not clear whether this was a real boom or bust for MTV in terms of growing its audience base and brand, but it was a resoundingly successful advertisement for getting even more folks to log on, visit new cyber-bars and create their own cyber-homes of tomorrow. Bruce Damer, in their book Avatars! Exploring and Building Virtual Worlds on the Internet (1997, look it up) summarizes the Tikkilandconcept as: “Is it kitsch or will it be seen as high original art when unearthed by digital archeologists in the next millennium? Either way, MTV’s Tikkiland will go down in history as one of the first places where the new cyberculture meets traditional pop broadcast media.” 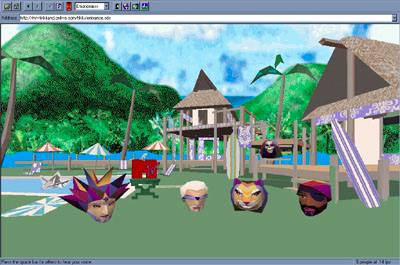