I accidentally started making a book

(Why I said making instead of writing will become obvious quickly)

In late December, as things start to slow down and wrap up for the year, I was feeling pretty burned out. I’ve been feeling burned out for a while (and I’m certainly not alone in this sentiment, there are so many reasons to feel burned out even in the best of personal circumstances, which are my circumstances). I also had a lot of pain associated with working on the computer, mostly tension in my neck and shoulders. I keep trying to pick projects to work on that don’t involve writing code for fun, but then I pick things like crocheting, reading books, and other things that leave me hunched over a small area for hours at a time.

I’ve always been an indoor kid.

Anyway, in December, I set out to yet again avoid screens – my eye fatigue felt particularly bad. So I started a small illustration project centered around tracing images of old video formats (something I love) on my reMarkable2 (something I also love, something that’s been a total paper replacement for me and eye-saver when reading). This was a nice, meditative type of practice. 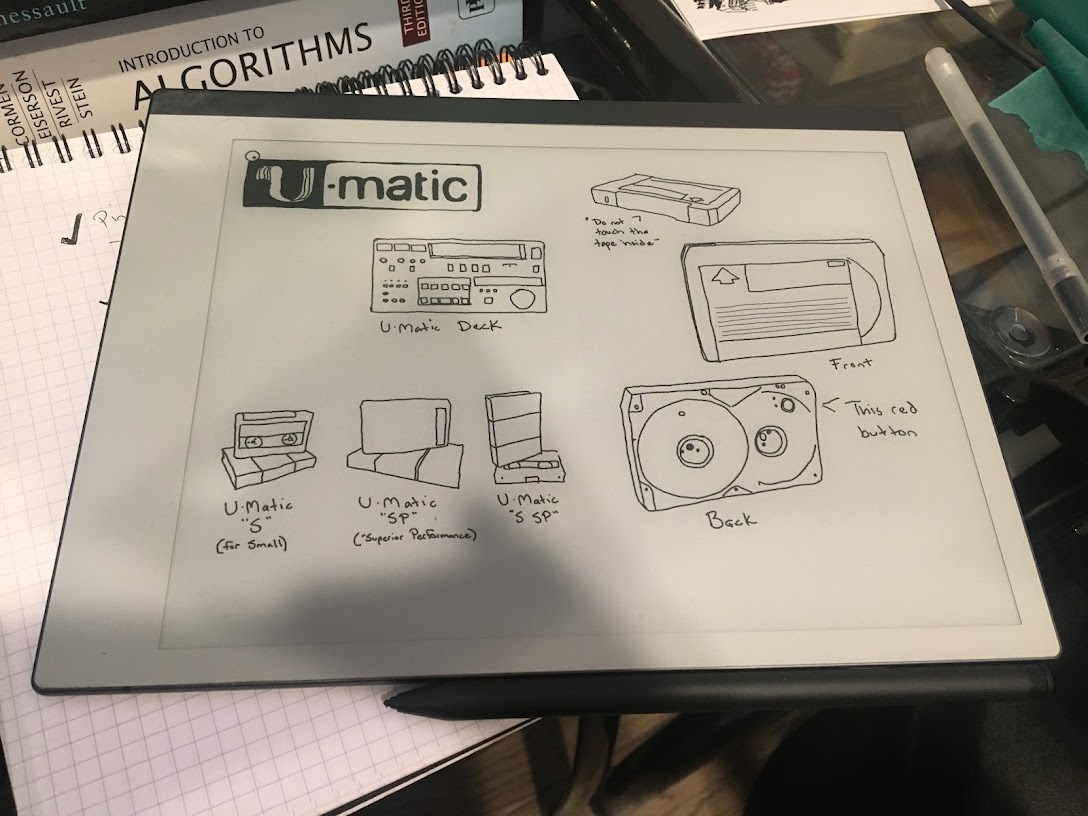 My intent with this was to create illustrations and then put them online, allowing other people to have open-license cute drawings for whatever purposes. I still intend to do that, but things have taken a bit of a detour.

The illustration project started to grow, and it keeps growing.

After moving the illustrations back into computer-land, I noticed they could use some sprucing up. Just a little shaping in some place to get all of the wobbly lines out, that kind of thing. Into Inkscape I took them, arranging them into layouts. I had stopped thinking of just illustrations and they began to form themselves into small 11x17 posters. For each illustration, I started shaping up the lines (ctrl-l, ctrl-l, ctrl-l). It’s a super manual process and not unlike the original act of tracing and creating the illustrations in the first place, so I kept going. 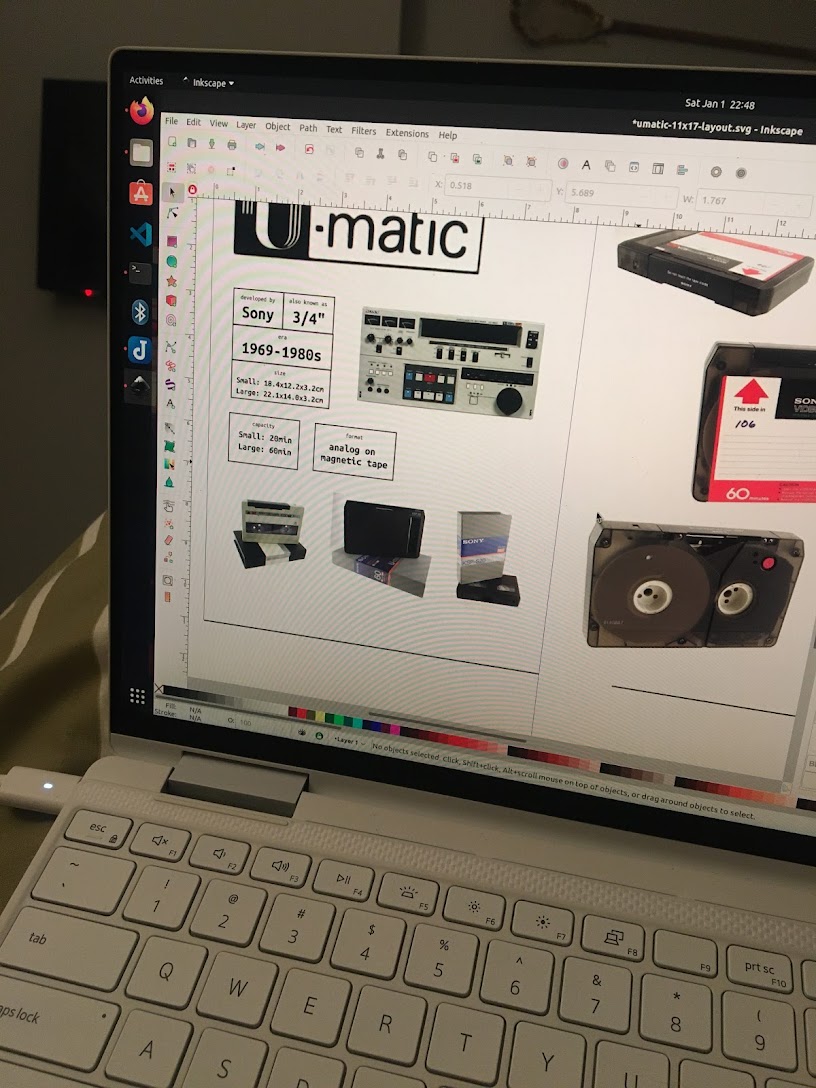 I also found this to be meditative, even though I was back on the computer again, the place I wanted to not be. I could do this work while listening to podcasts and lounging on my bed (terrible for posture, by the way) and it became another gentle practice that helped take me out of the hustle-n-bustle workday and into a gentle space while scratching that millennial-guilt part of my brain that feels like she should always be working.

These kind of reminded me of a coloring book. Hmm, that’d be fun, right? A coloring book instead of posters. Something very tactile, where the value is that it is something off-screen, that can be held.

From there, well, the pages were looking nice, but isn’t it important to know a few details about these formats instead of just the names? Next thing I knew, I had a list of minimum significant properties – analog/digital, era, developed by, also-known-as, capacity, dimensions. Now I’m in a bit of a research phase because like any classification system, there are exceptions and other weird tiny messes made by humans over time, even for things like the dimensions of a video tape. Again, this felt pretty soothing and something I was interested in fully understanding anyway, moving through different sources and correcting where necessary, aligning facts. 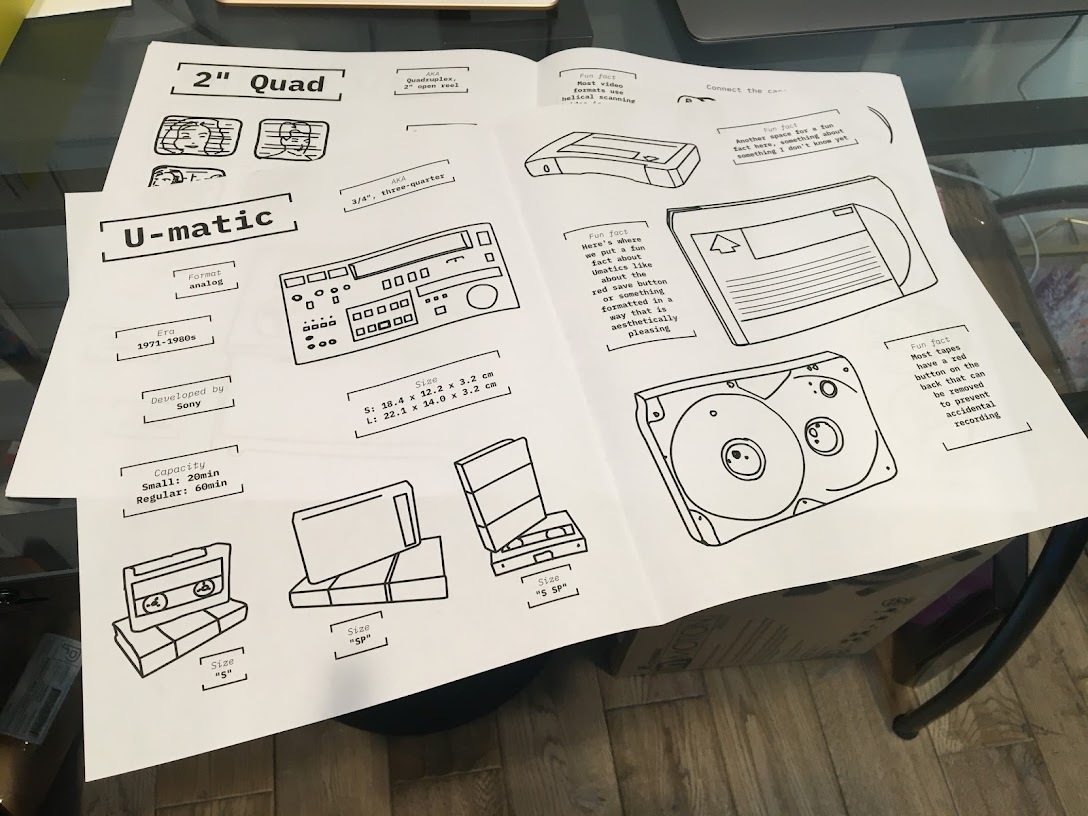 Then, I started learning fun facts.

This is the point where things start to take a bit of a downward turn, I think. It seemed pure enough at the time; I was learning a lot more than just the basic details of a format, and some of the facts were really interesting – reasons for format adoption, why formats are called certain things, the rise and fall of different formats. So okay, I’ll just add three fun facts to the what-is-now-35-formats. Finding and verifying facts and making sure they are “fun” is something you can’t do while zoning out to podcasts after a workday, though, so they did begin to take over my life for a while. 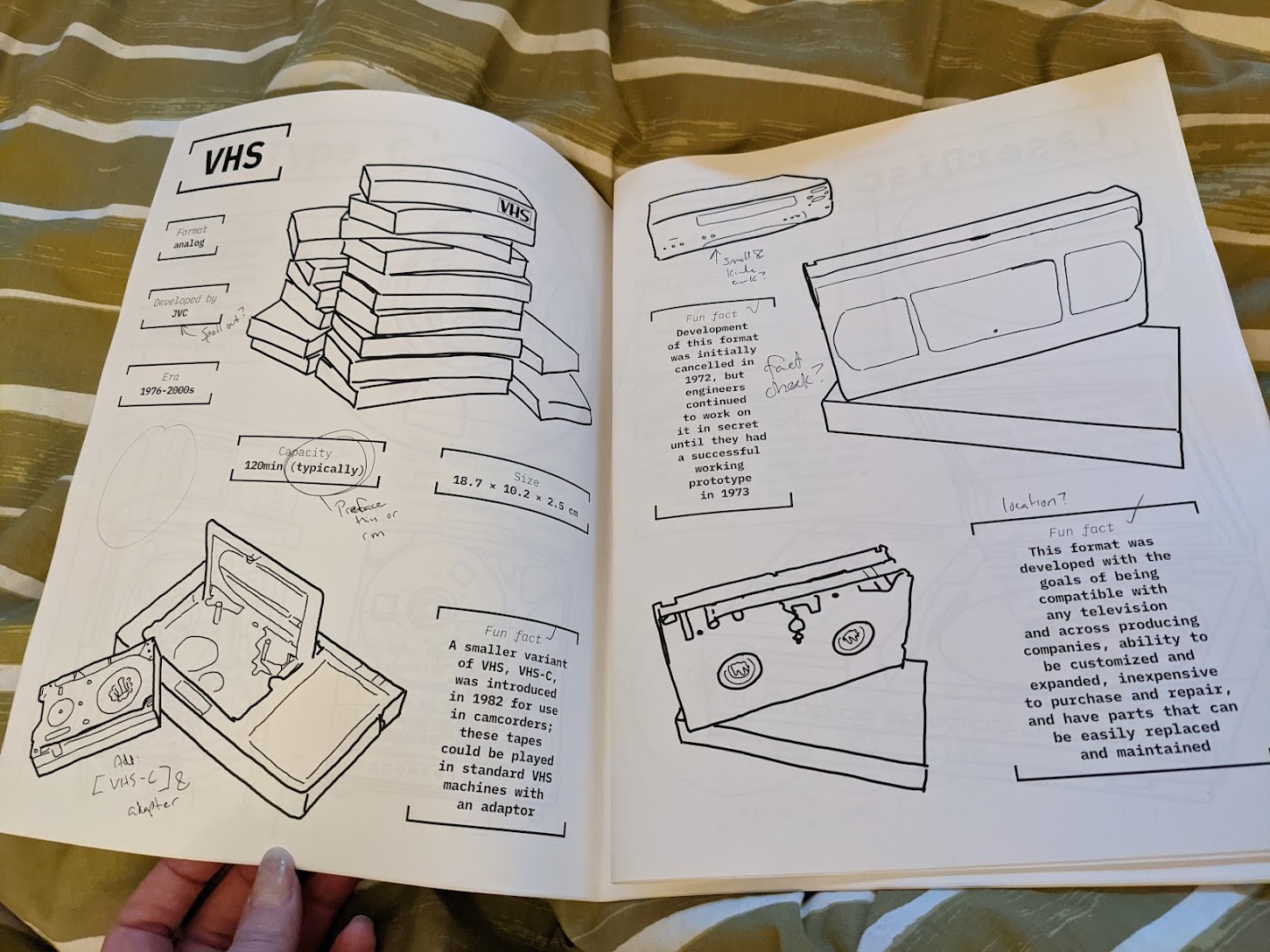 There’s no big crash here, though, but eventually I made it through the fun facts, even if now I resent their funness and sometimes their factness.

At this point, this project has really started to feel more book-shaped. At some point it was like I woke up from the slow-moving underwater-sloshing fever dream and I’m looking at 70 pages of a book draft, along with the realization that my undergraduate degree in graphic design had NOT been going to waste in my brain. 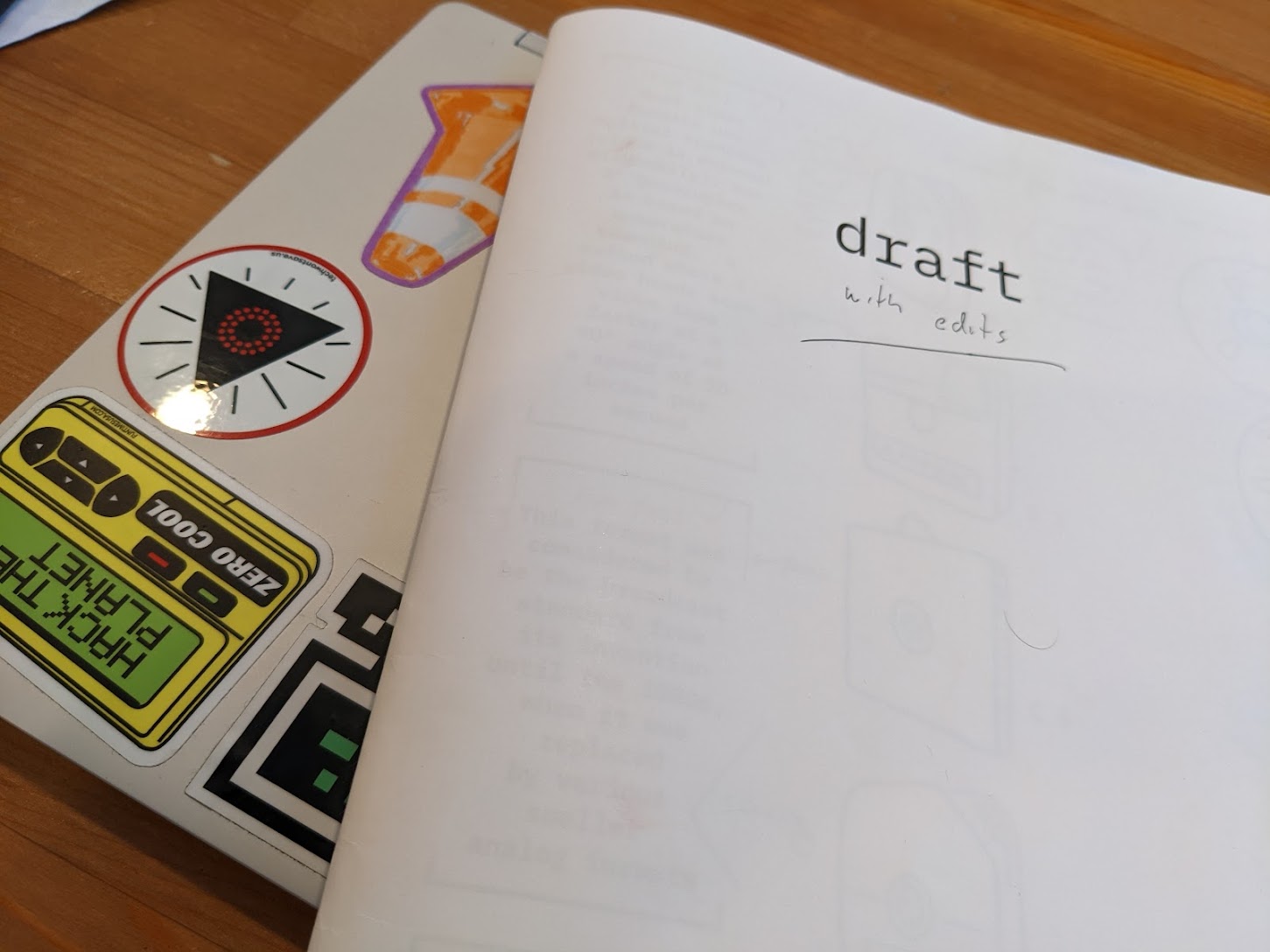 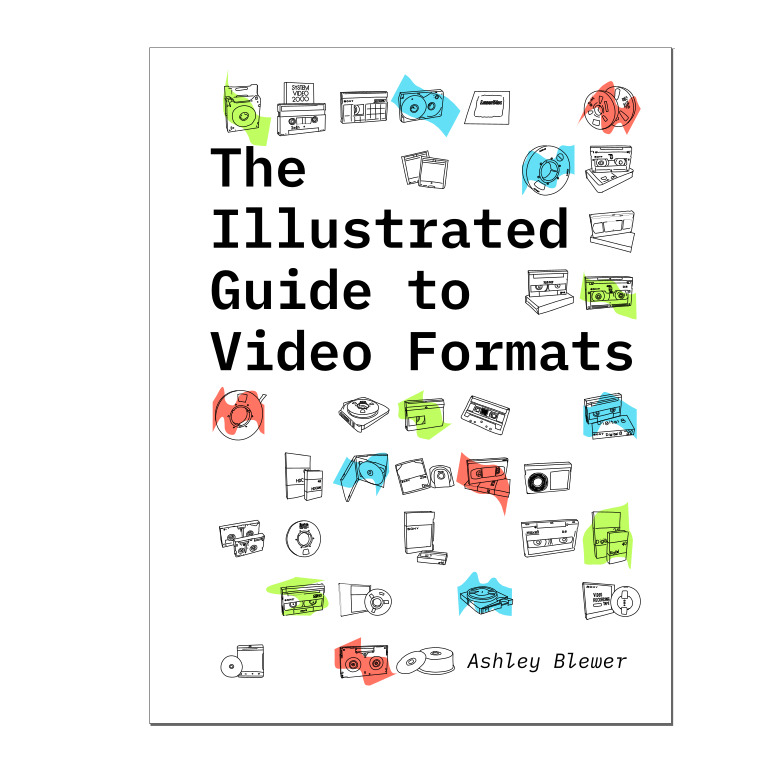