What would this blog be, if not a platform waiting to look extra extra closely at Beyoncé music videos? And now on Netflix is a 2+ hour film ready for consumption!

First, here are links to my previous blog posts on this subject, probably my most popular blog posts of all time:

Again, I am going to try to not get into hypothesing the WHY these artistic choices were made, but focus on the HOW. But briefly, I want to say it’s no surprise that Beyoncé seems so preoccupied with working with different moving image mediums. Her career started when she was 15 (or earlier, but I’ll cite her self-appraised ascent to Diva status: “Since 15 in my stilettos, been struttin’ in this game”), which would be circa 1997 (and citing HOMECOMING, her 22-year career). In 1997, shooting film was still the professional standard, with video as the consumer standard. So over her career, she’s had to work in film, analog video, digital video on tape (DV), and so many digital video formats. And so much of HOMECOMING is about that 22-year career, everything that inspires her past and present, and a celebration of Black excellence – something that is comparitively missing from being documented within our collective cultural heritage on these older mediums.

Shout out to the National Museum of African American History & Culture, especially the wonderful team working on The Great Migration Home Movie Project for working to mitigate this.

The HOMECOMING credits name three full-time archivists responsible for the long-term preservation and access to this extremely prolific career. This documentary could not have been done without them, and Formation and LEMONADE could not have been done without them. They are absolutely essential to being able to produce these works, and I don’t personally know but I feel confident that they also played an important role in helping Beyoncé and her production company understand the pros and cons of working with film and video, not just with regards to handling the past but also working in the present. I can’t imagine the knowledge they are all holding, but like with everyone involved in Parkwood, from day-to-day employees to Coachella production support, “They trying to party with the Queen, they’re gonna have to sign a non-disclosure.” But think of and thank all of them, particularly the director, who has basically (AFAIK) built the archive from the ground up, every time you watch this film. I hadn’t acknowledged them really in previous blog posts because I’m always trying to be careful around public versus private knowledge, but now it’s all out there.

Okay! I promised to stay in my lane, so lets get in it.

Watching HOMECOMING, there are scenes from two Coachella nights spliced together, with probably a dozen (if not more) cameras focusing on capturing the event. But what I didn’t expect to see was two people shooting Super 8 right alongside the HD digital video! I went back and forth wondering if these were real or done in post later, but I got my answer less than halfway through when I could spy a Super 8 cameraperson in the reverse shot immediately after a Super 8 scene. But I have suspicions about some of the “Super 8” footage… which I’ll get to later. 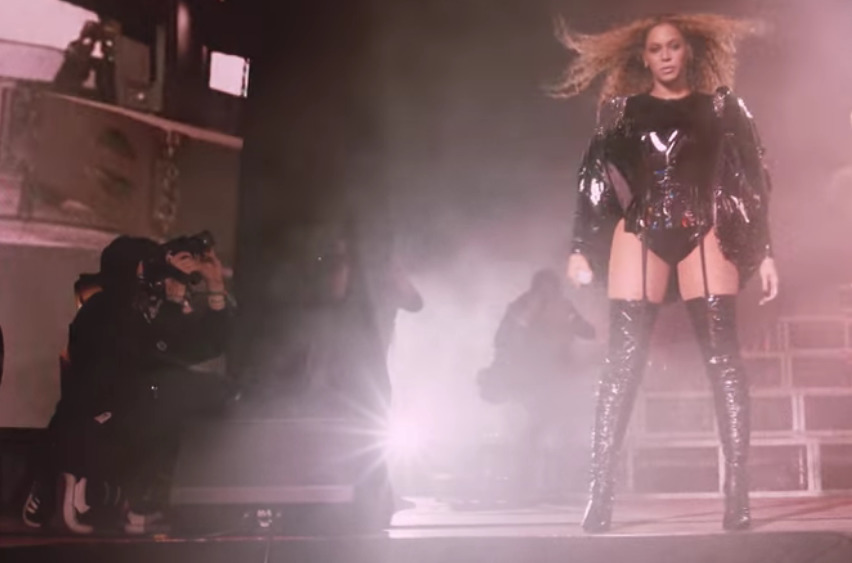 This is right in the middle of the film, at the beginning of “Don’t Hurt Yourself,” if you want to catch it for yourself. The cameraperson is also holding something in their mouth, maybe the most recent or next reel, since Super 8 only captures a few minutes per roll and I can’t imagine how many rolls must have been used during the course of this concert.

I’m asserting that it is Super 8 due to the film sprockets being directly in the middle of each frame, unlike standard 8 film, which has them at the frame line.

Tangeantial fun fact: the music video for “Flaws and all” was made on Super 8.

To me, it’s amazing to see how far technology has come, being able to watch the same concert with 1960s amateur film technology alongside the latest professional equipment in 2019. I think these two shots really show it well: 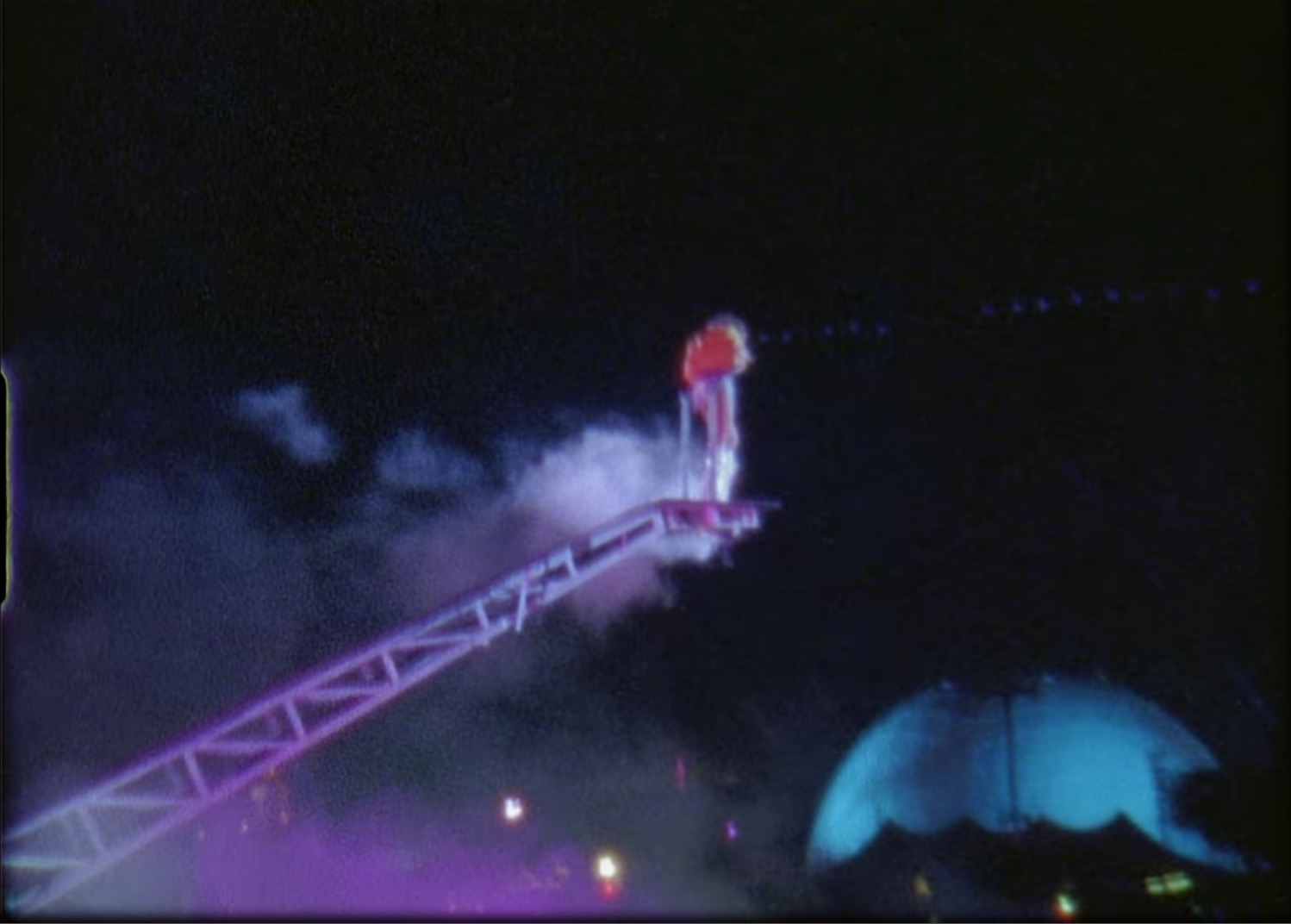 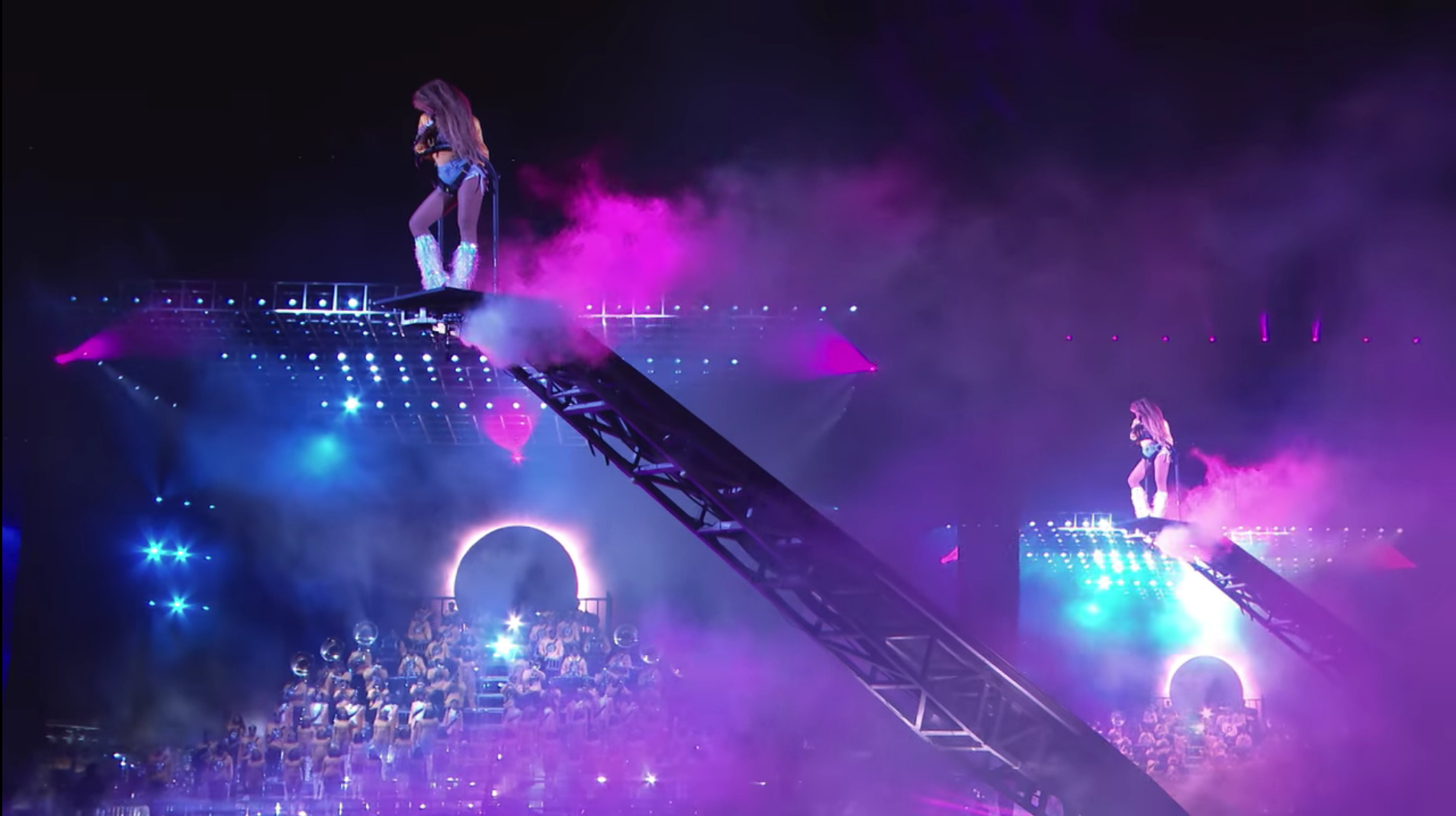 Especially the HD digital video being simultaneously streamed onto massive screens that are also visible in the shot.

What helped me understand which footage was genuine and which was fake was the dirty lens marks (on the top right) that appear later in the show, and the blurred focus on people at a long distance or when zooming in without adjusting the focus, like this frame shows. 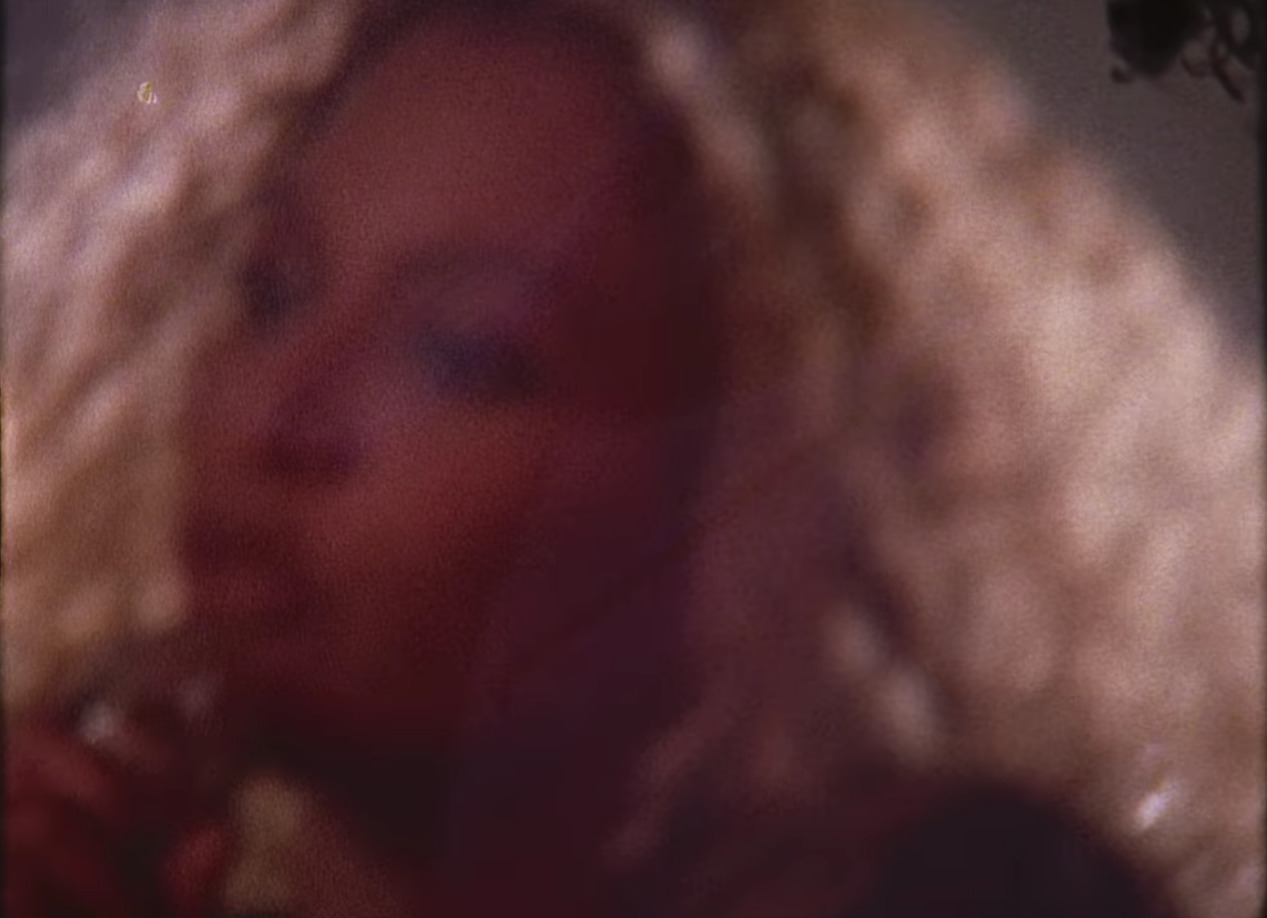 Also, the Super 8 footage doesn’t handle blinking lights as well as digital. Super 8 is limited to 18 or 24 frames per second, and I have no idea what modern digital cameras shoot at these days, or what the target playback frames-per-second rate is for streaming video – the concept of frame still exists in digital video but it gets much muddier when working with adaptive streaming video. It’s a different beast in a lot of ways.

I think there are times when they wanted to use some handheld camera footage that was shot with a digital camera, but maybe thought it would look better styled as small-gauge film to make the wobbliness more forgiving. Here’s a shot and a reverse shot showing the difference. This is kind of an exaggerated difference – there are Super 8 shots that look really excellent, but these are two side-by-side extreme examples of authenticity versus non-authenticity. 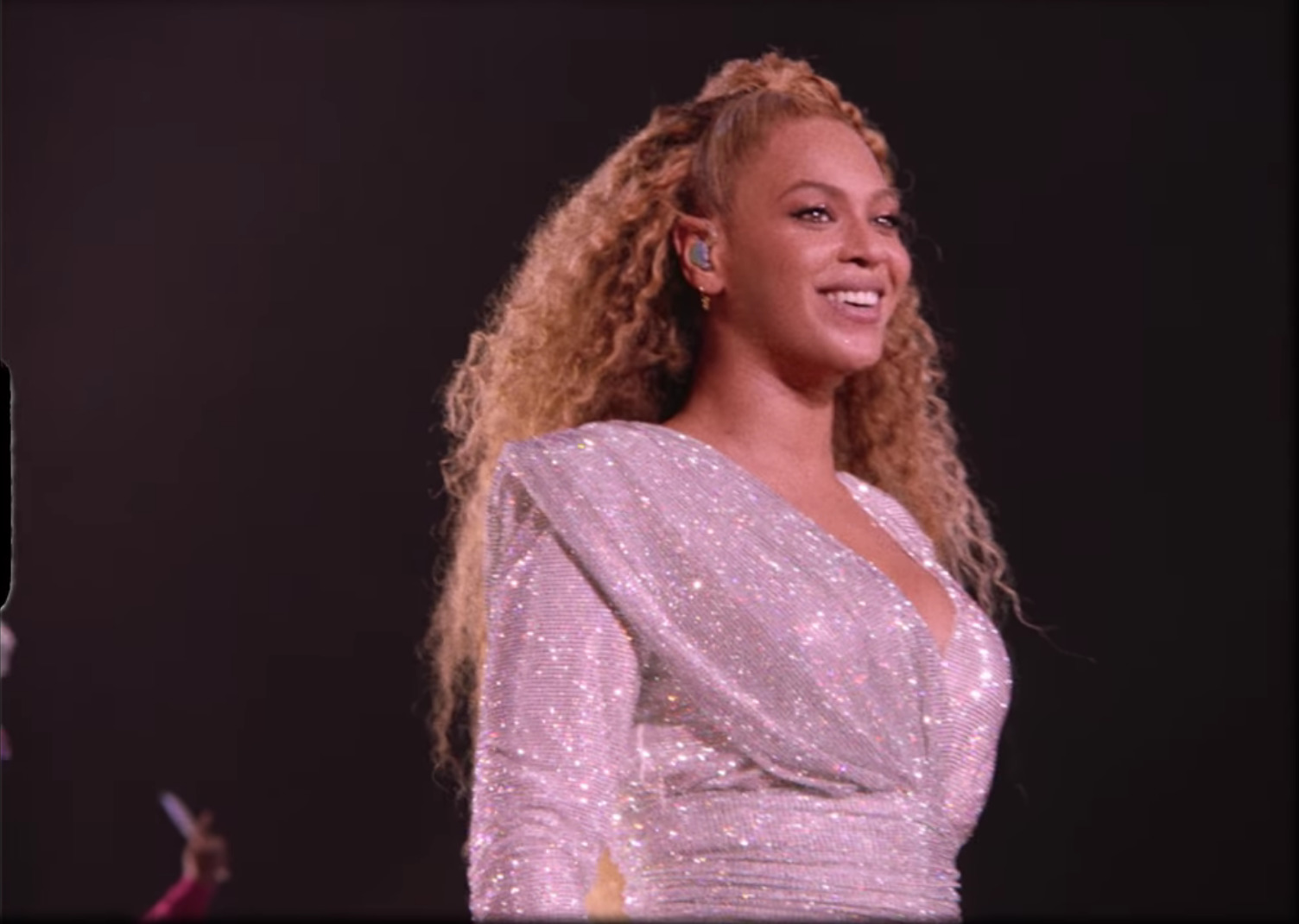 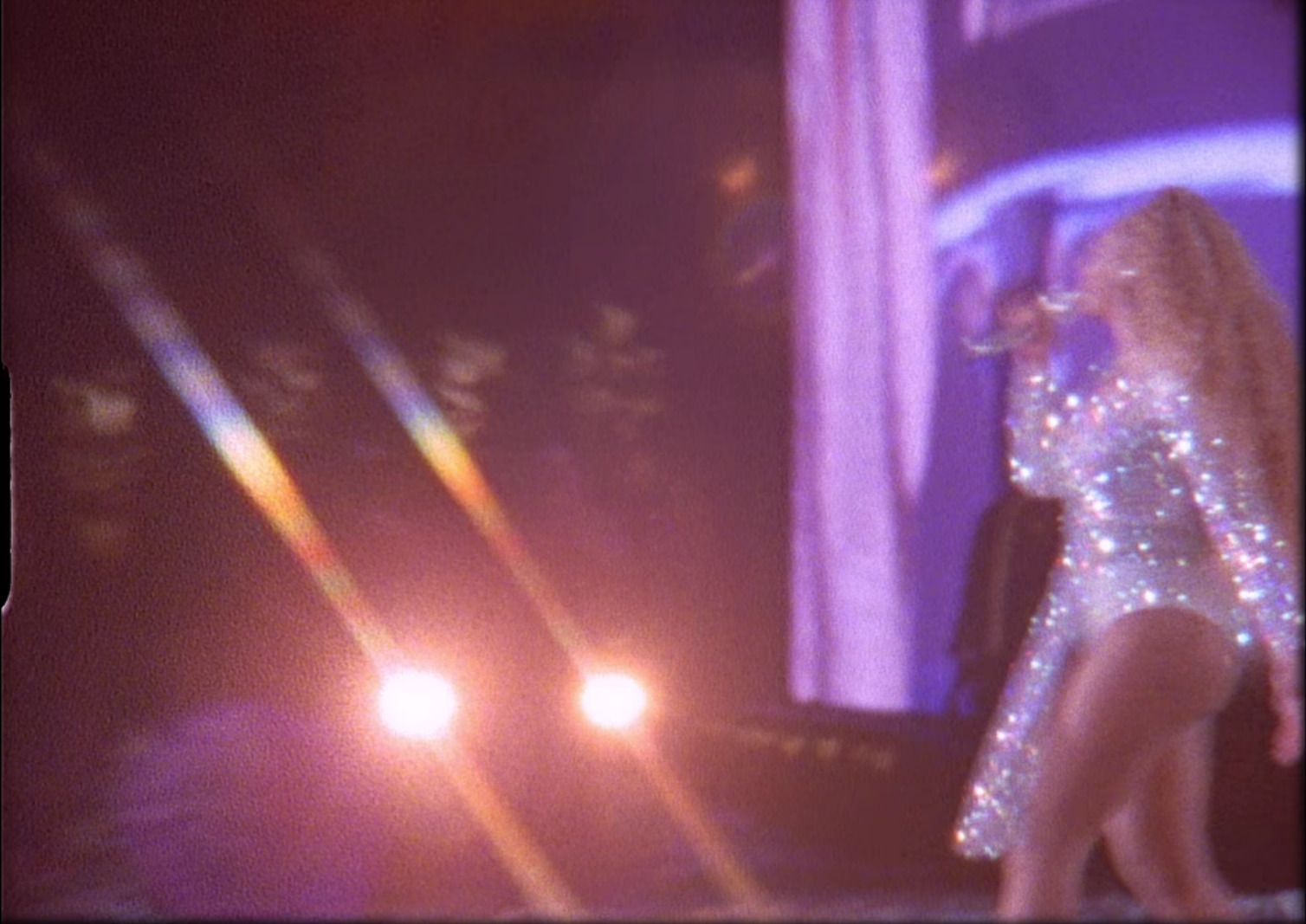 There are scenes that are cut in a 4:3 aspect ratio, black and white, with rounded corners. I think some of these are digital video with a filter over them, but looking closely at some of the travel/bus footage, I think the film grain is very apparent and very authentic. I particularly like this shot below, and on the very top left corner there is some smudgy dots that move with the camera. I think this is probably real and 16mm (because of the shape of the camera and the feel of the grain). 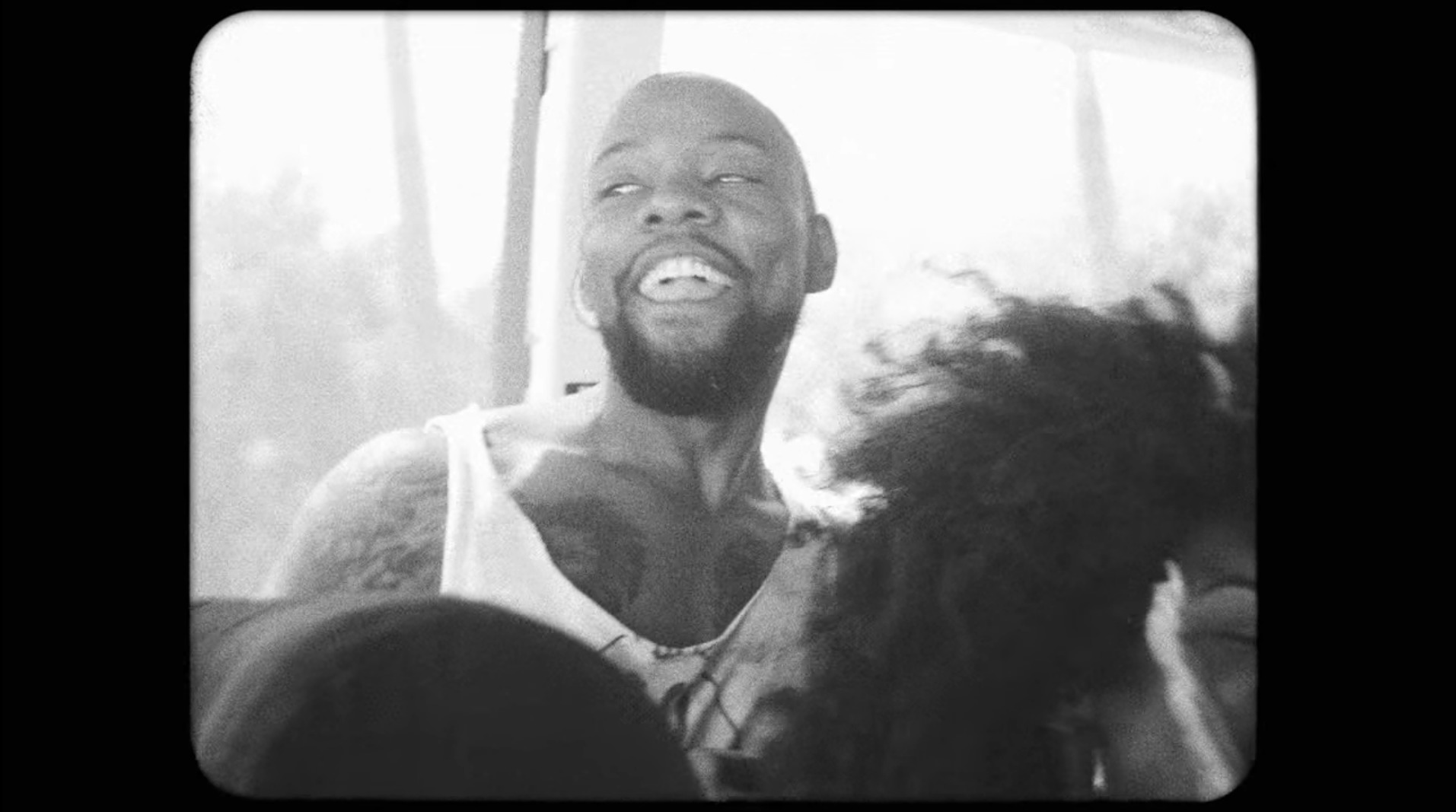 The following scenes here seem to be half taken with this camera, and half the aforementioned digital video styled in post. I think the interview clips, especially, were originally digital. Also looking very closely at the edges, I see what looks like digital artifacting – a sort of digital grain caused by editing and compression.

Everything is going to get colorgraded in post-production by exceptionally talented people but I think the film just comes out warmer overall. The lights and sequins shine more brightly (even if just because they are oversatured and the camera can’t handle any nuance). I think it’s something that people say and that I knew (that film feels richer and warmer, the same language used for vinyl versus every other way to listen to music), but it’s rare to see footage from the same era but from different mediums presented alongside each other like this.

Here’s one of the few shots with a film light leak during the practice sessions (and some dirt specks, a few frames after): 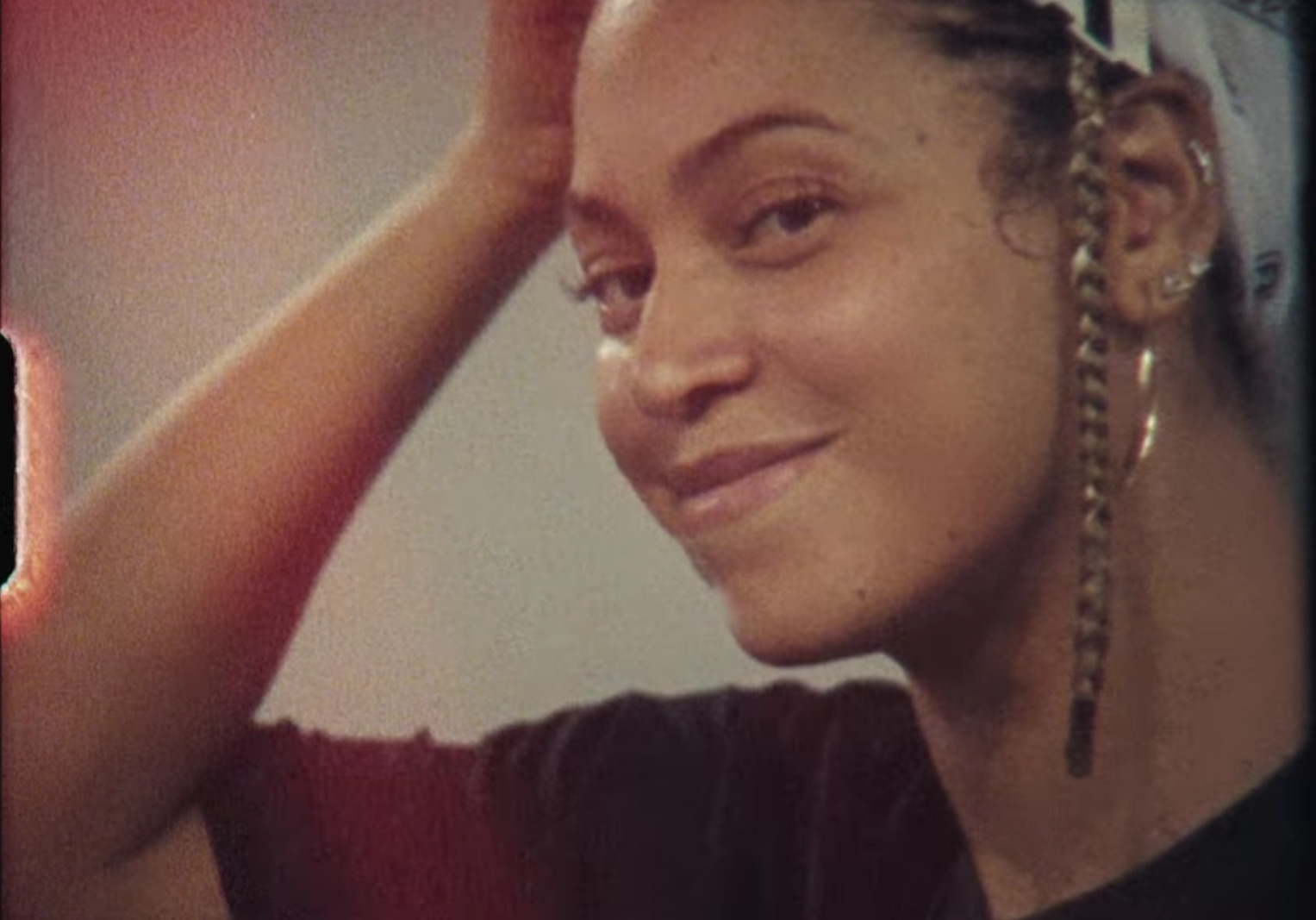 New VHS was being captured in 2018 during the practice sessions,too! The big tell-tale of VHS is the head-switching noise at the very bottom of the frame, although sometimes it is cropped out. If it has been cropped to fill the entire screen, which it is in some scenes, it definitely won’t be visible. But what I like about a lot of the VHS footage taken and featured in this film during practice scenes is the absolute graininess of it, but a graininess very distinct from film grain. Grainy isn’t really even the right word, I’d maybe think of it as lumpy. The color is inconsistent, especially in poor lighting conditions, which much of the practice space probably was. 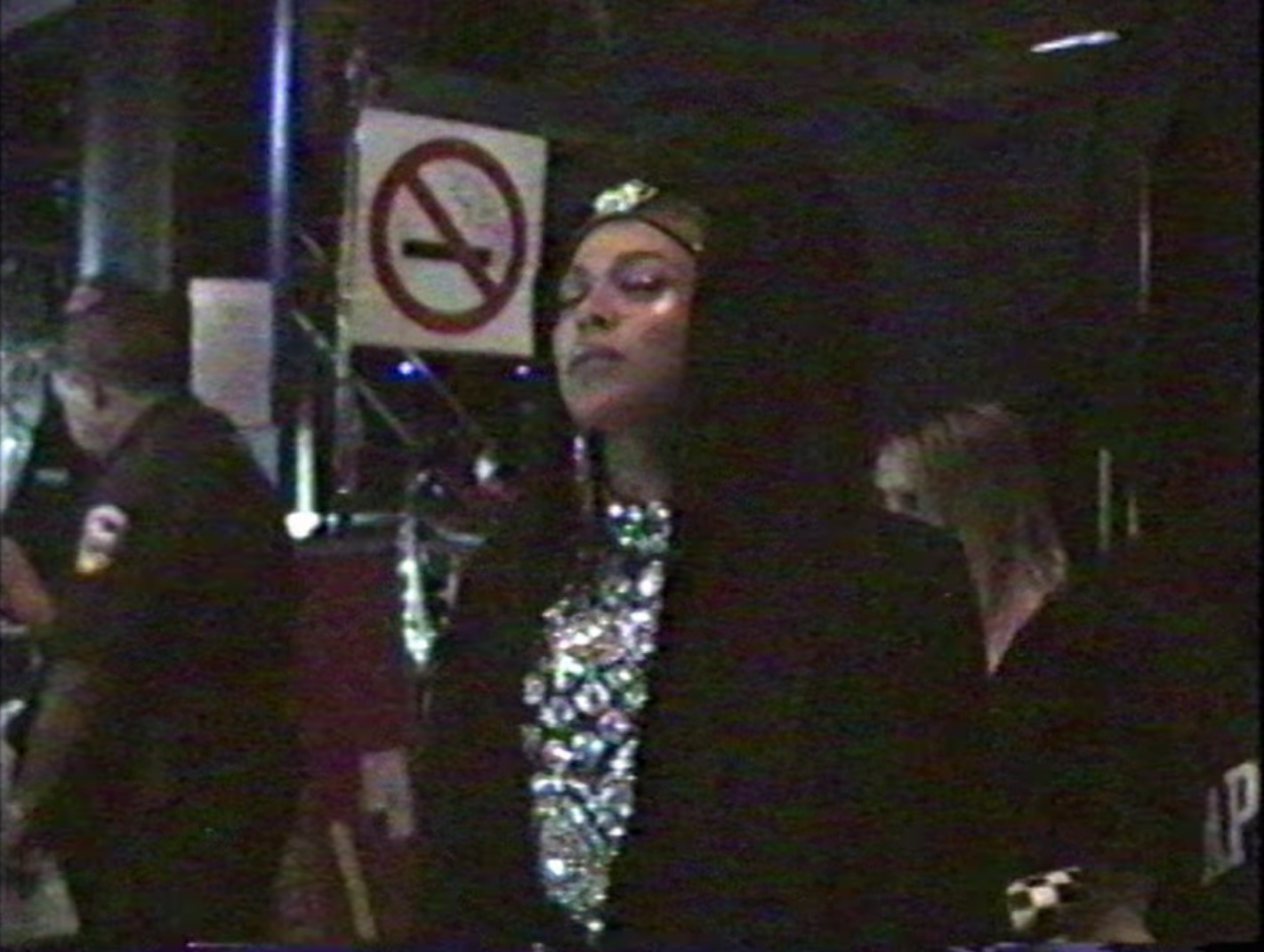 And there’s not a lot of VHS from the concert itself, but there is a little bit: 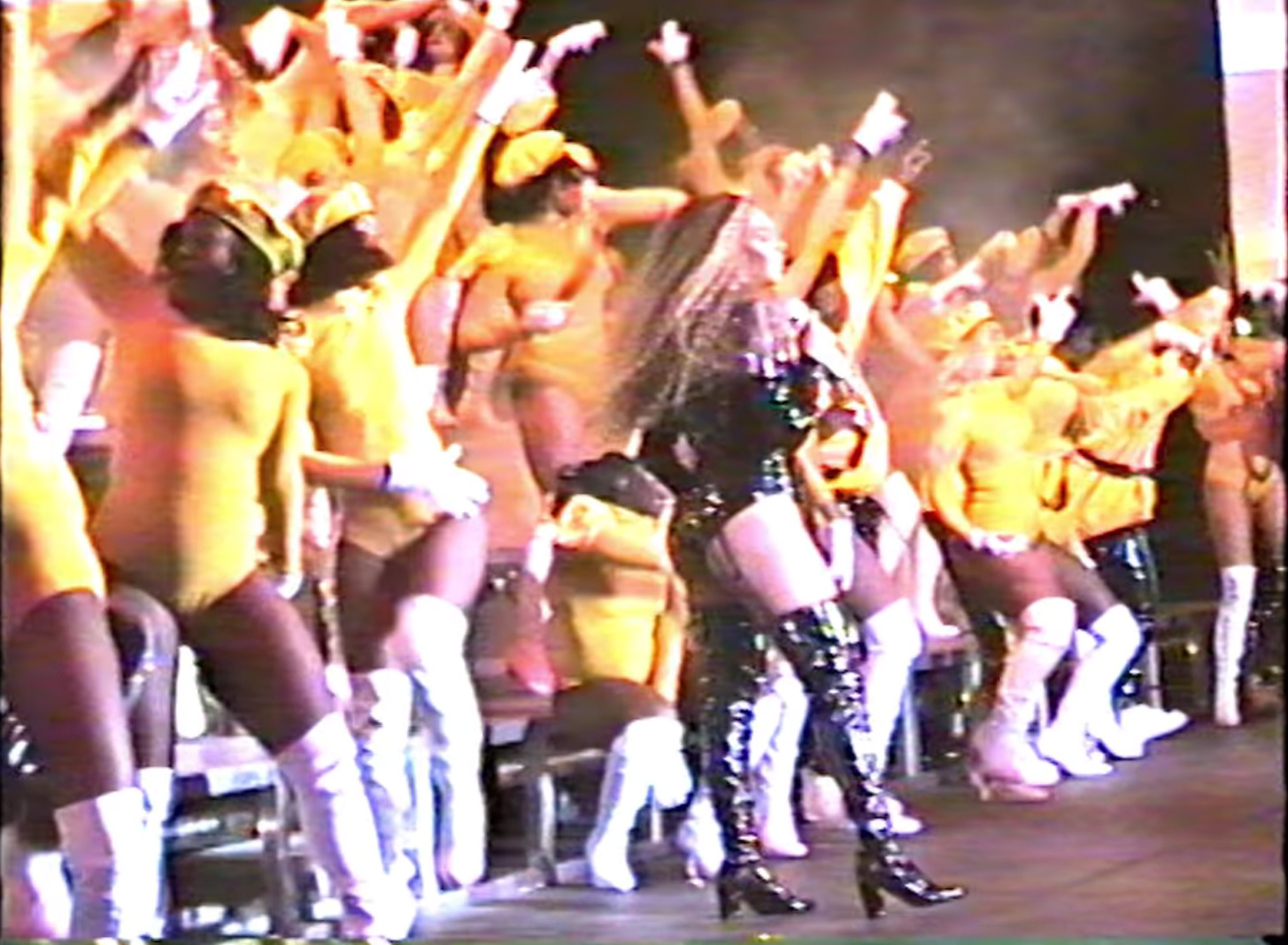 There are many more video clips from practice sessions, but the best way to see them is to watch HOMECOMING yourself, stopping at each tiny clip and learning how to “read” video and film for yourself! Or check out my other blog posts for more details into film and video errors and how to identify them – I didn’t want to rehash them all here.